It’s almost exactly thirty years since Boris Becker became the youngest player to win the men’s singles title at Wimbledon. Having been in my final year of primary school at the time (and in my final days of childhood in London as we prepared to move to Somerset) I still have a pretty heady cocktail of memories of that time. We were shunting our worldly possessions down the much-feted M3/A303 route from the capital to South-West England every weekend, and we were relying on a decidedly dated black-and-white television to heroically summon up coverage from SW19 when in Somerset – if we weren’t making use of the radio in our Volkswagen camper van to follow Becker’s irresistible rise into the fame and fortune honeypot. 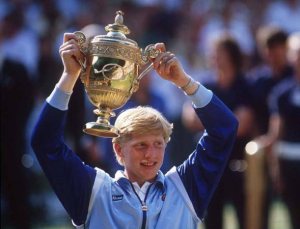 He knew we were in the Volkswagen listening

Irresistible is certainly how it felt at the time: like a few other Wimbledons since (in particular, Andre Agassi’s title triumph in 1992 and Roger Federer’s second title in 2004), there was a sense even at the time that Becker was completely dictating the narrative of the fortnight and therefore destined to win. Like just about everyone else in modern times, however, he actually had to win the seven matches to get there first, and this wasn’t some unimpeachable formality: it was probably the exact opposite when he twice had to break Joachim Nyström to stay in his third-round encounter and then made the walk to the net when injured (and therefore apparently ready to retire) in the next round against Tim Mayotte (Becker’s manager and coach both shouted and exhorted him to carry on; they got their way and Becker got his victory).

On a note of exacting Scandiness, one thing that stands from a distance is my memory of how the commentariat and purveyors of punditry on the BBC pronounced the name of Becker’s Swedish semi-final opponent, who again had Becker in trouble before failing to convert some points for a two-set lead and then coming out far less inspired after a rain-break took the match into the final Saturday. Anders Järryd was (I am convinced) Anders Yah-RUDE as far as they were concerned. In years to come, the RUDEness subsided and instead a rather flat aridity came to the fore as Yar-RUDE became YARID.

Why the change? I pondered this at the time, and then realised this week (for the first time ever) that in any case there is an omljod/umlaut/double dot/call it what you will over the a in Järryd. So therefore it seems to me that JAIR-ryd (not quite rude and not quite rid) is the optimum pronunciation, at least if around 1:10 on this YouTube clip is anything to go by.

My fetishistic desire for complete verbal and oral perfection when essaying accents notwithstanding (we know we’re culpable on this blog a lot of the time, so we don’t push the matter), what stands out looking at some old footage of the 1985 final between Becker and Kevin Curren is how restrained the crowd are at match point for Boris (see from about 2:49:00 onwards here). Key matches at Wimbledon nowadays seem to unfold in a permanent cauldron of noise, articulated spectator nerves and emoting (not that this is a bad thing; it has heightened the raw and sharp immediacy of proceedings). Certainly when we are fortunate (as we have been over the last decade or so) to have a succession of frankly absorbing and see-sawing confrontations at all levels in the men’s game, it rather deftly complements the niceties of whether you say Jar-RUDE or JARID or, in actual fact, neither.

Järryd for his part was a fine player, one of the last of the (now almost extinct) brigade to excel in both singles and doubles. In spite of that semi-final loss to Becker, he was in peak form in 1985, reaching a career-high number 5 in the singles list and number 1 in the doubles rankings. He won eight Grand Slam doubles titles in his career, three of them with Stefan Edberg, who may well resume his modern rivalry with Boris Becker, in a coaching format at least, should they respectively guide Roger Federer and Novak Djokovic to the men’s final on Sunday week. (Or Novak Đoković if you’re purist to a fault or double fault about that kind of thing.) 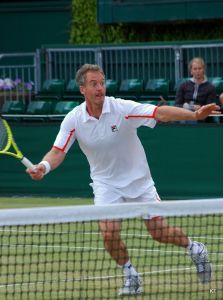 Not forever defined by Becker and the rain: Anders Järryd cutting a dash at Wimbledon 2011, where he got to the senior men’s doubles final with Jeremy Bates